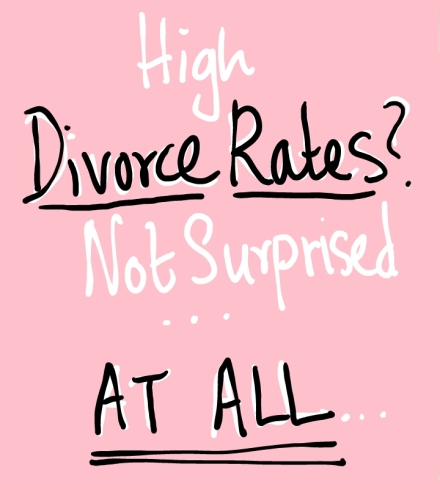 It’s remarkable how everyone in the country is talking about how we ended up on the Guinness Book of World Records as the country which has the Highest Divorce Rate in the World.

While this is plain embarrassing to read, I have been aware of this information for quite a while. The Department of Judicial Administration released a statistics book in September 2012, which revealed a lot of dirt. (Sorry, but I couldn’t link you to the online document of this publication, because apparently our judiciary does not find the need to put them up on their website or make it accessible to the general public at all).

According to these statistics, in 2011, 6015 couples tied the knot, and 3016 couples got divorced – meaning that, our divorce rate was at 50.41 percent. Which means, for every two couples who tied the happily tied the knot, one couple would sever knot – talk about utter sacrilege. What’s even more depressing, is that this number increased to 52.83 percent in 2012 – and it’s bound to rise, I believe. To have a thorough look at the statistics, go here.

As embarrassing as this is to discuss, I believe we cannot sweep this under the rug any further. Divorce is considered sacrilegious and incredibly frowned upon even in the Muslim religion. How is it that a 100 percent Islamic state, end up with the highest divorce rate in the world? What are the factors behind this sad phenomenon?

The 2011 and 2012 Statistics from the Department of National Planning indicate that, the age group which had the highest number of marriages were between 20 – 24 years, while the age group between 25 – 29 had the highest number of divorce rates. In a country where there is such pressure to get married (for women, more than men, in general) due to our religious beliefs and societal norms, these numbers do not surprise me at all.

We grow up hearing about how women should not stay single for too long ‘because you won’t be as fertile in your 30s’, or how men should get married as soon as possible because their sexual needs must be met – or else, they shall commit adultery. I find these rationale so humorous.

In a city like ours, which is the 45th most densely populated city in the world (according to wikipedia), with poor housing, rising inflation rates, 28% unemployment rate and rising and not to mention, increasing gender-based violence, this is quite expected. It’s quite apparent, even from that one sentence, that Male’ is not a city worth living in – especially be married in. However, it’s also understandable why people from all around the country flock to Male’ by all means – it’s quite simple, really – Male’ has what other islands don’t.

What other reasons could there be, which contribute to these figures? What needs to be done to address this?

It’s really high time we think about the broader picture, instead of sitting at home twiddling our thumbs and playing the blame game. Maldives does not have the highest divorce rates because we are sadistic people who love handing out divorce papers to each other. It cannot be easy for couples – especially the younger couples – to get divorces.

There are reasons – valid reasons – why people get divorces in the Maldives. I am not embarrassed at the fact that people have an affinity towards divorce in my country. I am more embarrassed that our country is not well-suited and to be brutally honest – quite uninhabitable, if you want to get married.

Dear new government, are you listening?

TALES OF A CONFECTIONIST

A food blog - eating out and about while enjoying life in Canberra // Instagram: @tales_of_a_confectionist

Tales from the life & times of an inconsequential arrangement of quarks

This here henceforth shall be subject to the verbal and visual regurgitations of one Oola, a morbid and confused wee Maldivian.

Life. Bits and Pieces of It.

THE THINGS THAT SHINE

The latest news on WordPress.com and the WordPress community.